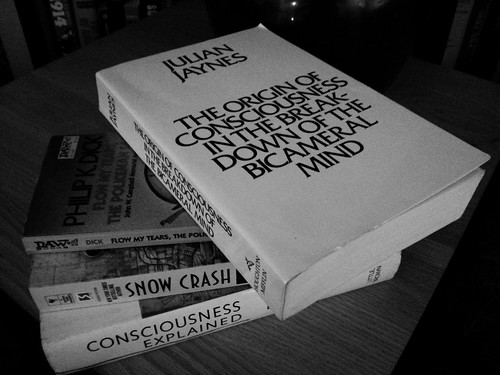 Jaynes’ book atop books by a few authors who were influenced by his theory.

Julian Jaynes’ book, The Origin of Consciousness in the Breakdown of the Bicameral Mind is one of those books that just about everyone reads sooner or later. Jaynes is an example of the rare author who could write a scientific treatise that was both ground-breaking and readily readable by the general public. His book was published in 1976 and presented what has to be the most controversial theory ever in the fields of consciousness and religion. Despite the theory seeming completely outlandish at first glance, the book presents testable predictions all along the way. Many modern researchers believe Jaynes’ theory to be partially or completely wrong but there’s no question it has pushed research toward a better understanding of consciousness and religion. Daniel Dennett, who notes Jaynes was probably wrong at least about some particulars like the importance of hallucinations, still thinks his main thesis could be correct. Evolutionary biologist Richard Dawkins commented that Jaynes theory is “either complete rubbish or a work of consummate genius, nothing in between! Probably the former but I’m hedging my bets.” In addition to scientists, Jaynes’ theory also inspired two generations of science fiction authors from Philip K. Dick to Neal Stephenson (who based parts of Snow Crash on Jaynes’ theory). David Bowie acknowledges being influenced by this book during his work with Brian Eno on Low and has included the book on his list of 100 Must Read Books.

Julian Jaynes was an American psychologist interested in the origins of consciousness, which he defined roughly as what a modern cognitive scientist or philosopher would call meta-cognition – the awareness of our own thoughts or the ability to think about our own thoughts. In his early research, he specialized in animal ethology (the study of animal’s behavior, communications, and emotions). He began to focus on understanding how consciousness evolved in early humans and studied historical texts and anthropological evidence for clues. This led to his now famous theory that humans initially developed a bicameral mind and that modern consciousness was the result of a breakdown of the two parts.

Bicameral in this case is a metaphor, the word normally describes a type of government consisting of two independent houses. Jaynes came to believe that, as recently as 10,000 years ago, the human brain lacked both consciousness and the strong lateral connection via the corpus callosum that it has today. The two halves of the brain operated more independently but were able to communicate via verbal hallucinations. Humans at this time would have already evolved basic linguistic capabilities, but without the complex metaphors and self-referential aspects of modern language. People behaved in what we would describe today as a ‘zombie-like” way. They would have lacked the ability to reflect on or guide their own thoughts. In times of extreme stress or facing novel situations, the right side of their brain would communicate advice or commands to the left via auditory hallucinations that the person experienced as “hearing a voice”.

As today, humans tended to build up models in their mind of people who are important in their social interactions, parents, tribal leaders, and the like. Jaynes believed the models existed in the part of the mind generating the hallucinations and that the voices often came to be perceived as originating from these people, even if they were not present; even if they were dead. Without the ability to introspect, people simply accepted the voices at face value and assumed they represented some kind of external reality. This predictably gave rise to the earliest religious beliefs: ancestor worship, divinity of kings, belief in an afterlife. It also served as an important social organizing structure that allowed early community groups to form.

This process worked well until about the 2000 BC, when civilizations were going through a periodic collapse. At this time, the growing population was leading to more frequent interactions between disparate groups of humans, resulting in a failure of the bicameral hallucination mechanism as a method of social coordination. If everyone in your group hears the same voices in their head, things work fine. If three or four groups suddenly start living together and everyone is hearing different voices in their heads telling them conflicting things, civilization doesn’t function smoothly anymore.

The result was a gradual breakdown in the bicameral structure of the brain due to the changed environment which gave a huge advantage to individuals whose brains had more direct communication between the two sides via the corpus callosum. This allowed metaphoric language and consciousness to co-evolve, gradually leading to humans who could think about their own thoughts and had the words to describe it. This would also be the origin of the idea of free will, at least in the modern sense. Prior to this time a person did what their brain directed but without any awareness or insight into the process. So, effectively, modern consciousness is a by-product of cultural and linguistic evolution.

The bicameral breakdown leads to the gradual decline of the right brain area that generated verbal hallucinations. Everyone remembered a time when people could hear the “gods” but only a few remain who can still hear their voices. Those people are sometimes elevated to the positions of priest, shamans, oracles or they are seen as insane, eventually classed as schizophrenics.

The whole thing sounds fantastically crazy at first, right? Jaynes says as much throughout the book. But, like any good scientist, he has worked out a series of testable predictions based on the theory in a variety of fields ranging from history to human physiology. Modern researchers have continued to test his theories and, so far, many of his predictions have been dead on. For example, he predicted the existence of an area in the right hemisphere of the brain capable of generating linguistic, auditory hallucinations that is now vestigial and usually dormant. We now know the right hemisphere contains a vestigial area that corresponds to the Broca/Wernicke area in the left brain. This is the part of the left hemisphere responsible for the production of language. He further predicted this vestigial area would be active in schizophrenics who hear auditory hallucinations. Today, with fMRI scanning and other modern techniques, this has been confirmed too. And the hallucinations these patients experience are often in the form of authority figures (parents, leaders, gods) admonishing or commanding them.

Jaynes did an extensive survey of early literature starting with the earliest known writings and progressing through later more well-known documents like Homer and the early writings of the Bible. He analyzes to what extent the authors or the subjects seem to be self-aware and notes a gradual progression through history of both self-awareness and evolution of language to describe self-awareness. The writers of the biblical Old Testament or the Odyssey, for example, show no evidence at all of being self aware, in contrast to authors of the New Testament or later Greek writings. This is complicated by works that have been re-written and changed by later authors, like some books of the Bible or the Epic of Gilgamesh. In these cases, he tries to tease apart what’s original and what was added later.

He suggests that traces of bicameralism might still be found not just in schizophrenia but in many aspects of modern religion (e.g. those occasional people who still hear voices or experience “possession”) or even in the common childhood experience of having invisible friends (some children experience actual auditory hallucinations of their imaginary friends speaking to them).

Some modern researchers discount the need for the physical changes in the corpus callosum and believe the linguistic evolution of metaphor alone may be enough to bear out the changes Jaynes’ theory describes. There is now a huge body of literature surrounding the Bicameral Mind theory; lengthy articles defending or attacking aspects of it. There are also now several variant theories. Lain McGilchrist has proposed not a breakdown in a bicameral mind but a separation and reversal in the two hemispheres of the brain. Michael Gazzaniga, a pyschobiologist has done extensive experimental work in the area of hemisphere specialization and has proposed a theory similar to Jaynes’.

Jaynes is an engaging and interesting author and, whether his theory eventually proves to be crazy or profound, you’ll find the book a great read. If you have any interest in philosophy, religion, consciousness, cognition, evolution, anthropology, literature, history, or any of a dozen other topics, you’ll love the book. It makes you think about things you would never have imagined otherwise.