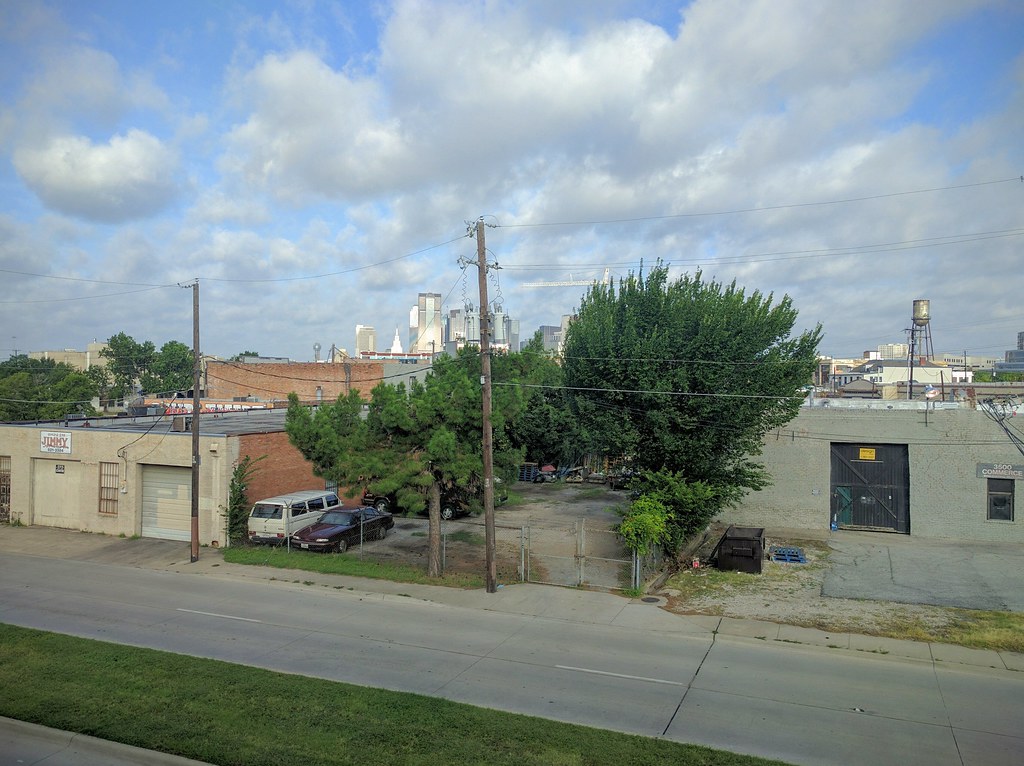 View from my office the morning after the Dallas sniper attack.

Wow, how to summarize the last 12 hours. Last night there was a peaceful protest march in downtown Dallas in response to the recent killings by police in other states. Towards the end of the march, snipers began shooting at police officers. The shooting was audible a half mile away at my office in Deep Ellum where I was working late. I thought at first it was fireworks, then I starting seeing events unfold on social media with posts from friends who were at the march. At least 14 people were shot, 12 of them officers. 5 officers died, 4 DPD and 1 DART officer. There appear to have been four suspects, 3 male and 1 female. (update: this is still in flux, latest reports are back to just one suspect again). One of the suspects holed up in a parking garage and was involved in a standoff with police that lasted for hours. When neogtiations with police broke down and the suspect started shooting again, the police killed the suspect using a bomb delivered by a DPD robot.

A lot of downtown was on lockdown most of the night, including the parking lot where most of the protesters parked. My friends in the march were unable to get back to their cars and had to spend most of the night in Union Station. Uber was providing complimentary rides to get some of them home. I stayed over night at my office in Deep Ellum. Everyone I know at the march and in downtown is safe. From early reports of what the deceased sniper said to police, the shooting was racially motivated but does not appear to be associated with the protest march aside from taking advantage of the police protection that DPD always offers to marches and protests downtown. The route of the march had been announced beforehand, so the shooters could easily have planned the best location for their attack.

It’s morning now and already the political spin is running full bore, trying to turn this terrorist attack into rating points for one side or the other. Either we have to support all police, who are universally good and we must believe everyone they shoot to be evil thugs; or we have to assume that all cops are bad and corrupt and that everyone they shoot is innocent. This political effort to force all issues to be black and white is intentionally divisive and needs to be rejected. Reality is never that black and white. We need to support good cops while still calling out bad ones and peacefully protesting against injustices. There’s nothing inconsistent about marching in a protest against unjust police killings while still supporting our local police who are risking their lives to protect our right to free speech.