Not much happened over the weekend. The weather is warming up again. Susan and I attended our weekly symphony at the DSO. I ran across a new web site called Project Magnus that’s archiving interesting image tiles for use as desktop backgrounds. I dug up a copy of our Web Wrangler CD-ROM, sucked off about 30 of the more interesting tiles we created for it, converted them to PNG format and uploaded them to the Project Magnus site.

The other thing I’ve been pondering lately is a solution to the intellectual property problems that are cropping up as a result of the clash between the old way of doing business in the movie and music industries and the new way of doing business in the open source and Internet world. I think the solution is a new type of license for intellectual property that does what the GNU GPL license has done for software. Imagine a license which would make movies, recorded music, printed music, artwork, etc. freely distributable and usable by everyone. I’ve written a first draft of such a license. Once I get it a little more refined, I’ll make it available for comments. In the meantime, if anyone has any comments or suggestions on this idea, I’d love to get some feedback.

What a week! The MPAA is going nuts, our T1 problems resurfaced again (only briefly fortunately!), and lots of perl coding. And now we’re in the middle of a sudden pile of cold weather. It’s been below freezing two days in a row and there was even a bit of snow falling yesterday – all very unusual. I did manage to get some time to refurbish our sick linux box at home. The hard drive has been threatening to die for a while. I pulled the SCSI drive and controller card out and put in a spare 11gig IDE drive. I’ve installed RH6.1 and things seem good as new. It’s nice to have a real computer at home again. Now I have something to do while Susan works on her genealogy on the Windows box. And I’ll take a P133 with Linux over a PII450 with Windows any day…

This news is just too weird to believe. Jon Johansen’s house was raided today. The MPAA’s power is completely out of hand. I quote from his email posted on Slashdot:

The National Authority for Investigation and Prosecution of Economic and Environmental Crime in Norway raided my home today and seized my Linux box, FreeBSD/Win2k box and Nokia cellphone. Not only I, but also my father has been indicted, since he owns the mmadb.no domain (webhotel) where my homepage(s) have been located. They also took me in for questioning which lasted 6-7 hours. It’s 2 am CET now (I just got back), I haven’t eaten, and someone’s definitely going to pay for this.

This is insane. The MPAA, RIAA, DVD-CCA, and other IP organizations are now waging all-out war against the open source movement. Please consider making a donation, however small, to the EFF to help defend the victims of these attacks. If you have access to a web site, please mirror the source.

I picked up a new CD of Philip Glass music recently called Circles. After listening to it just a few times, it’s already one of my favorites. This is all the more unusual because the recordings are of solo piano performances. I generally loathe any and all piano works, but there’s something about Glass’ music which makes it sound perfect when performed this way. Arturo Stalteri is the performer and also arranged a few of the pieces. All of the compositions are interpretations of existing works by Glass – nothing actually new here. Interestingly, I probably never would have bought this CD (after all, it bore the dread warning label “Pianos” on the front), except that I liked the cover art: 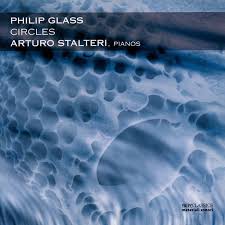 If you like Philip Glass, I recommend you buy this CD immediately; you’ll love it. Even if you don’t like most Glass music (hi Susan!) you’ll probably find this quite enjoyable. And, like all Glass music, I find it excellent for dispelling brain clouds.

As I write this, I’m watching the lunar eclipse out my office window. The Earth’s shadow is now covering most of what was a full moon just minutes ago. (thanks go to Roger for the pic!)

The week began with a sad note. Susan got an email Monday morning saying that Ken Loss-Cutler had died Friday of a heart attack. Both Susan and I have known Ken for many years and he was a friend. Susan worked with him at Showcase and earlier at Dallas Post.

I had worked with him on different computer related jobs off and on over the years. Ken had a wide range of interests. He loved drums and other drummers are probably familiar with the Drummers Anonymous 12-Step Program that he compiled. He was active in the home-schooling community. He was one of the founders of The North Texas Free-Net. He even contributed some computer animations that he made of the Jupiter SL9 impact to the SL9:Impact ’94 CD-ROM that I published a while back.

I regret now that we hadn’t stayed in contact much in the last couple of years. We attended the funeral Monday afternoon and, as funerals go, it was nice. Both the variety and quantity of people present was impressive. (And it was the first time I’ve ever worn a yarmulke!) As several of Ken’s close friends spoke about their memories of him, it brought back memories of my own.

Another week already gone! After solving our Verio DNS problems earlier this week, I spent the rest my time working with PostgreSQL. It took a couple of patches but I got it compiled and running on our Sun Ultra 10 with Red Hat Linux 6.1. I added a new 13gig drive just for the database. That should be enough space to get started. I’ve got our new web server (an Intel/RH61 box) set up with Perl DBI and PHP interfaces to the database server. Meanwhile, I’ve been working with Erin on our first web database application. I sneaked out of the office for a few hours today to catch the Georgia O’keeffe exhibit at the Dallas Museum of Art. It’s over in a couple of days and I’d promised Susan we’d go see it. It’s definitely worth seeing (but skip the audio guide!).