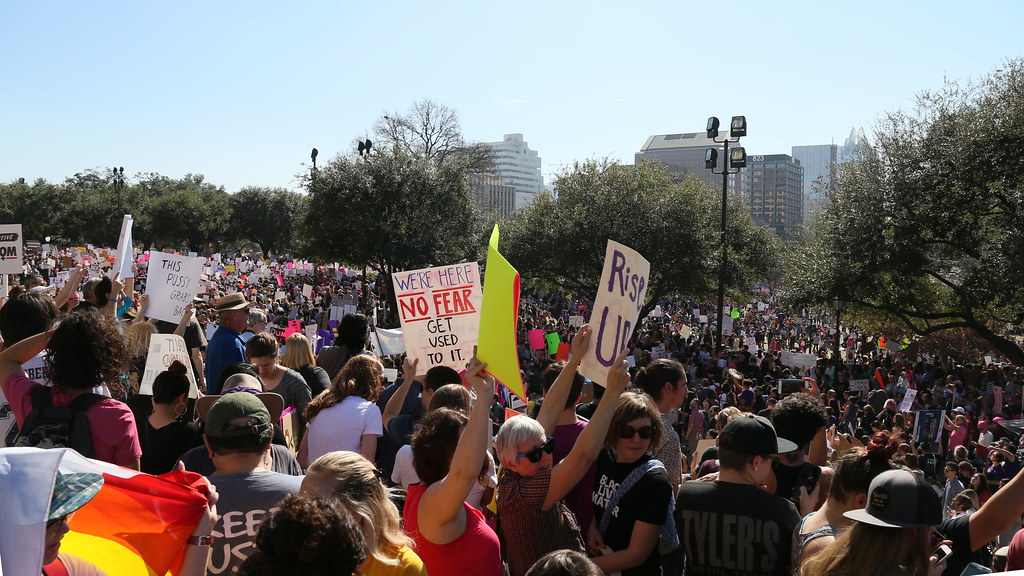 Like most people, we were disheartened by the horrible results of the 2016 election. The old quote that is variously attributed to Edmund Burke or John Stuart Mill kept rolling around in my head; “All that is necessary for the triumph of evil is that good men do nothing”. The awful coalition of the Tea Party, alt-right, neo-Nazis, white nationalists and the religious right that over-powered the Republic Party and spawned the Trump administration is as evil as anything in American history that I can think of. The growing need to do something, even if only a symbolic gesture of resistance, coincided with a chance sighting on Facebook of some event info about a Women’s March in Washington, DC planned for January 21.

There was no way we could attend a march in Washington, DC but there appeared to be ancillary marches in the State capitols as well. Austin seemed possible, so we put it on the calendar. The event info also mentioned the Pussy Hat Project – a good-natured poke at Donald Trump’s hypocritical “Make America Great Again” hats. His hats promoted bringing jobs back to America while ironically being mass-produced by low income workers in China. Pussy Hats, in contrast, would be hand made by individual American makers everywhere. Neither Susan nor I are knitters but I am a member of Dallas Makerspace, the biggest collective of hackers and makers in Texas, so it was pretty easy to find a like-minded knitter there. The talented Devin Burnett knitted us a few hats in exchange for the pink yarn. 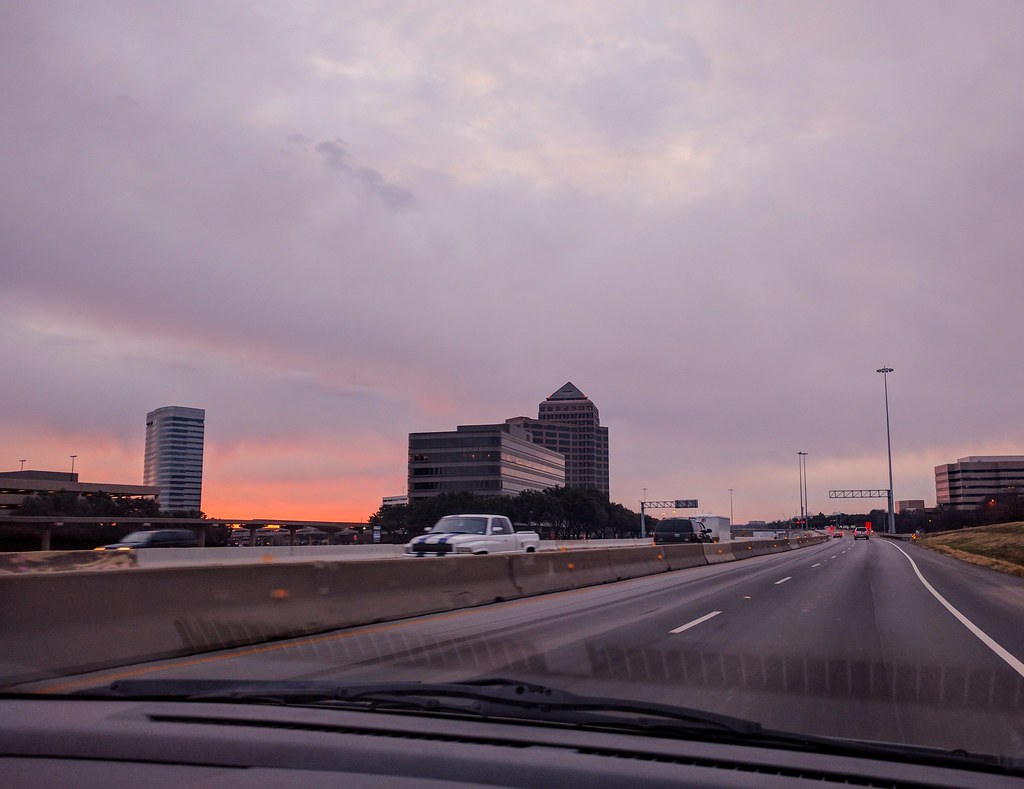 Early on the morning of Jan 21, the day after Trump’s inauguration, we set out for Austin. There was a beautiful sunrise but almost immediately a weird, dark haze began to settle over the landscape. There was no rain. It was more like a thick dark fog. We joked that perhaps as in Lord of the Rings, the rise of evil is always accompanied by a physical darkness settling over the land. The dark haze was with us most of the way down but finally began to break up as we approached Austin, revealing a beautiful, warm sunny day. Along the way to Austin we saw numerous buses and I noticed someone on Facebook saying they were taking a bus from Dallas to Austin. Had we known about them, we’d have taken a bus too. Our biggest worry was that it would be impossible to find parking close to the capitol. As it turned out, everything worked out perfectly.

We found the Cap Metro Howard Station Park & Ride on Google maps on the northern outskirts of Austin and decided to take a chance that there would be a way to get downtown on a Metro bus. We parked free and walked straight from the car to a waiting bus with Cap Metro employees waving us aboard. We tried to buy two day passes but it was an “exact change only” situation and the smallest bill we had was a ten that the cash scanner didn’t like. The driver asked if were going to the Women’s March. We said yes and she comp’ed us two day passes. The bus was full of other happy, pussy hat wearing marchers.

The bus arrived downtown and let us out a couple of blocks from the capitol. It was no problem finding the march. There were people from every direction converging on it and within moments we had merged into a stream of marchers. Originally, the plan was for everyone to meet at the capitol and then march a 1.5 mile path around downtown. As it turned out, there were so many people that the entire capitol grounds were filled as well as the entire 1.5 mile marching course. The Austin police estimated 50,000 marchers (and it’s now on record as the largest march in Texas history). So there was a continuous, endless loop of marchers on the 1.5 mile path for nearly four hours as well as the massive crowds on the capitol grounds. It was the largest crowd we’ve ever seen in person.

We marched for a while and then mingled with the crowds at the capitol. I shot lots of photos. I was amazed at the range of ages and the diversity. There were people of every race, old women in wheel chairs, children of all ages, I even saw one blind woman. There were lots of men as well and entire families marching together. There were lots of religious leaders marching too.

I was especially pleased to see the wide range of issues, well beyond just women’s rights being represented. I think this election may have awakened a widespread recognition that we have to stop taking things for granted, that we have to get out and work together or the forces of ignorance and superstition will overtake us all. I saw many signs advocating science and evidence based policy. There were a surprising number of signs bearing inside jokes of geeks, nerds, and science fiction fans. There was a general feeling of good-natured humor and fun among the marchers. Overall it was a great experience and I think it really encouraged everyone that maybe there is some hope after all. Maybe what we’re seeing is not the pendulum swinging back into the ignorance of the past but, rather, the last gasps of an ever shrinking minority who want to hold back the rest of the world and who may well die out in a generation.

We eventually headed back to the bus stop and made the drive back to Dallas. It was a long day but well worth it. Now we just need to get back to the everyday work of trying to make the world a better place. 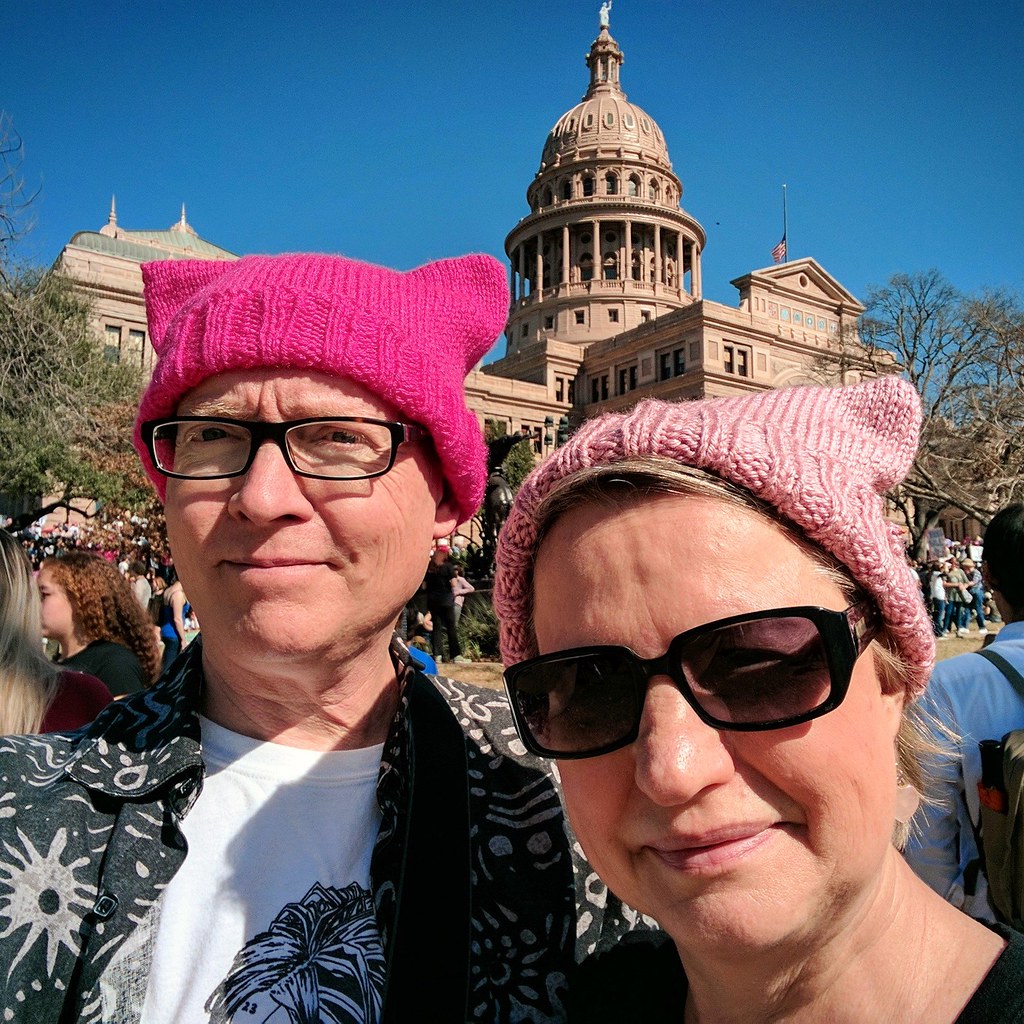