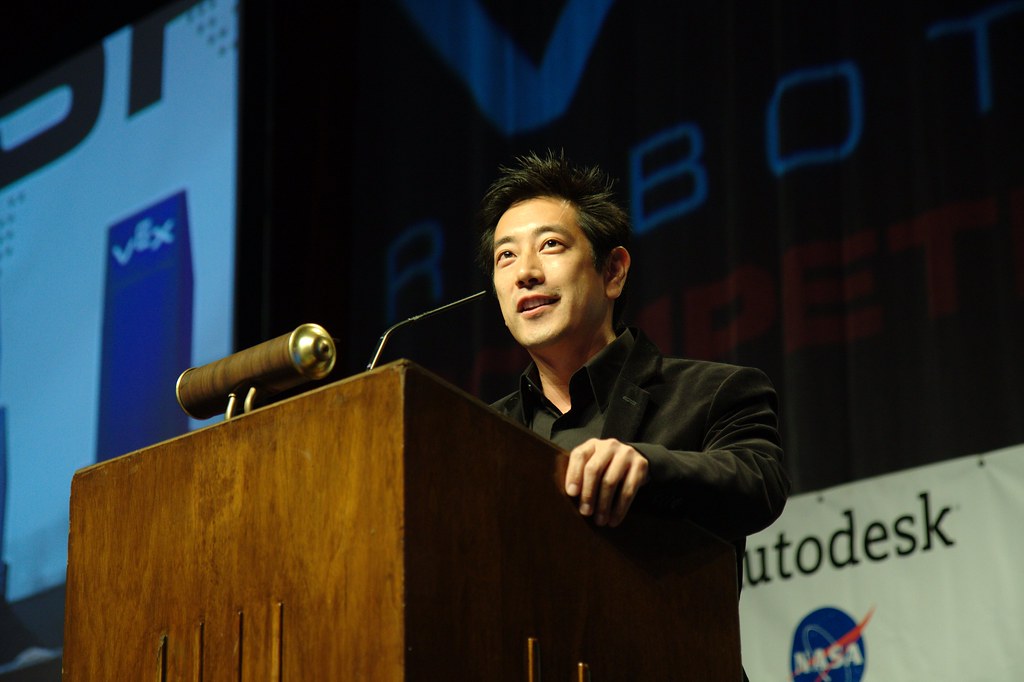 This year’s VEX Robotics World Championship was bigger than ever with more than 400 high school and university teams from around the world. It was held in Dallas, Texas again this year, so you can be sure we were there. The local Dallas Personal Robotics Group also got in on the act, offering their members as volunteers to help with the event. I managed to avoid serving as a judge this year, so I had more time to take photos, several of which you can see below. Grant Imahara awarded the top prizes to China’s Shanghai’s Luwan team and New Zealand’s Free Range Robotics and Kristin Doves teams. To make things even crazier, the BEST National Championship was held alongside the VEX events. The Metro Homeschool team 229 from Blue Springs, Missouri took the first place BEST award. Read on for more photos and details from the official VEX press release or check out my photos of the event.

The VEX robots were engineered to play the game “Clean Sweep” with students applying their programming skills and strategic thinking to defeat the opposition. Participants of the VEX program compete throughout the year and learn critical life skills including leadership, teamwork and technical problem solving. Richard Paul, captain of the Free Range Robotics team from the winning alliance said, “VEX Robotics has taught us how to work together in high pressure situations. We’re now better prepared to handle challenges because we’ve learned how to approach problems with different solutions.”

“At the VEX Robotics World Championship, students get to be the stars and are celebrated for applying what they learn in the classroom,” said Paul Copioli, president of VEX Robotics. “Our commitment is to engage students in science, technology, engineering and math education to get them excited about pursuing technology careers.”

BEST Robotics, a middle and high school robotics program established in 1993, hosted its national championship in conjunction with the VEX Robotics World Championship, where Metro Homeschool team 229 from Blue Springs, Missouri won the first place BEST Award. The BEST Award is the highest honor that any team can receive, and goes to the team that best embodies the spirit of the BEST program. Meanwhile, Conway High School team 185 from Conway, Missouri earned first place in the Robotics Award, for having scored the most points in the game, including preliminary, semi-final, and championship matches.

The 2010/2011 game VEX Round Up was also unveiled at the VEX Robotics World Championship. The game is played on a 12’x12’ square field and two alliances – one “red” and one “blue” – composed of two teams. Each alliance competes in matches consisting of a twenty-second autonomous period followed by two minutes of driver controlled play. The object of the game is to attain a higher score than your opponent alliance by placing tubes upon goalposts, owning goalposts, and by low hanging or high hanging from the ladder.

For more information about the VEX Robotics World Championship and all other award winners, please visit RobotEvents.com.

The company’s three subsidiaries, VEX Robotics, Inc., Innovation First Labs, Inc. (makers of HEXBUG Micro Robotic Creatures), and RackSolutions, Inc. span the education, consumer and business-to-business markets. The VEX Robotics Competition was launched in 2007, designed to give a diverse group of students the chance to celebrate their accomplishments and share their passion for robotics with each other.

Leveraging the company’s core competency in electrical and mechanical engineering, the RackSolutions division works closely with all major computer OEMs to provide custom mounting solutions and industry-wide rack compatibility for data installations of all sizes.

In the 2009 the company added offices in Hong Kong, China and the United Kingdom to better serve the global marketplace. With an advanced in-house metal fabrication plant, distribution center and corporate office located together in a 13-acre complex in Greenville, Texas, the company is poised to continue on a rapid growth path. Please visit www.innvationfirst.com for additional information.

(Portions of this text appeared in SERVO magazine and on the robots.net blog)