David Anderson, a long time fellow member of the Dallas Personal Robotics Group, did an interesting presentation recently in which he distills down what he’s learned about building subsumption based mobile robots over the years. The video is a bit long but well-worth your time if you’re interested in intelligent robots. David provides some additional notes that link to video of specific examples. And don’t forget to check out David’s “my robots” webpage for more photos and details on his robots.

2010 got off to a good start, then I was hit by some unexpected family losses followed by some annoying family weirdness. Between that and a larger than usual assortment of extra-curricular activities, my blog got derailed. It’s time to fix that.

For those who haven’t kept up with my twitter feed or photo stream, here’s the short version of what you missed the last few months: 1) The DPRG is working on starting a Dallas Hackerspace. We’ve decided to call it a Makerspace because Dallas people seem to be easily spooked by the word “hacker”. 2) I’m still playing with vintage cameras and have more in the queue to try out. 3) Still playing with my DSLR too. Got some recent photos into an exhibit Germany. My photos of the Traveling Man Sculpture made into the May/June issue of Robot magazine 4) Still working on the Noise Boundary robotic music project. We did a demo for a class at UNT and I got the opportunity to chat with Pat Metheny about the topic while he was in Dallas 5) DPRG did some major stuff at All-Con this year and also at Tech-Fest and the FIRST LEGO League regional championship. 6) Lots of other fun stuff, events, people, and places. More to come.

After the success of last year’s B9 Build Off Day, Jerry Chevailer held a new Build-Off in 2009. This year’s has been expanded to include all type of robots. The even was held at Jerry’s house in Rowlett, Texas. Builders of movie and TV robot replicas from all over the US gathered there for a few days of fun, food, and robot building. The two most heavily represented robots were Star Wars Astromechs like R2-D2 and the Lost in Space B9 robots. Member of several robot groups attended including the Dallas Personal Robotics Group, the B9 Builders Club, and the R2-D2 Builders Group.

I was able to stop by for a few hours and shoot some photos. Unfortunately, it rained that day so most of the robots were squeezed into the house and garage. It was sunny the next day and I heard that I missed Astromech street racing as well as some pretty amazing dancing by Jerry’s B9. For more photos of the event, check out my full Texas Build Off photo gallery on Flickr. 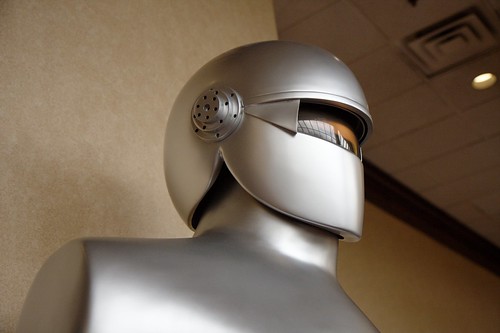 Cylons and other robots converged on Dallas, Texas this week for the annual All-Con science fiction convention. I joined other members of the Dallas Personal Robotics Group to do demonstrations of our robots. We ran line-following races with the 3pi robots. We hosted a “robot petting zoo” for kids to get hands on with real robots.

We got to hang out with Aaron Douglas, who plays a robot on the Battlestar Galactica remake. We saw lots of robots among the local cosplayers including a really fun Starscream Transformer. There were also some nice static, life-size replicas of hollywood robots created by local builder Jerry Chevalier.

And when we weren’t demonstrating robots we got to have fun with the derby girls of Assassination City and the Lollie Bombs burlesque girls, some of whom turned out to be robot geeks likes us.

Check out the mini-album above or go visit the full-size pics in my All-Con 2009 Flickr album to see all the cool stuff. 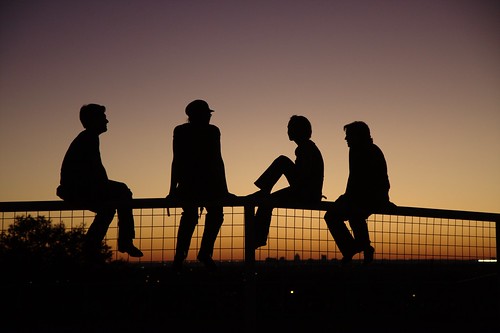 The Austin Maker Faire was last weekend and I was there, of course. I got a different view of it than last year because I spent part of the time as a maker. I helped out at the Dallas Personal Robotics Group table, where we showed off a variety of a small robots. We had several autonomous mobile robots, a robot arm that Martin interfaced with a game controller, a variety of robot components, and a couple of robot-like art pieces that were the result of my recent obsession with welding.

We did pretty well. There was a good-sized crowd of people at our booth throughout the faire, handling our robots and playing with the robot arm. Our table won an editor’s choice award from Make magazine. And we’re already talking about how we can do something bigger and more interactive next year.

All the usual crazy stuff was there too; cyclecide with their human powered carnival rides, including one they didn’t have last year called the Melody Maker, in which the rider propels spinning guitars to make music. The Austin Bike Zoo brought a 50 foot human powered rattlesnake that could be seen slithering in and out of the show barn and surrounding areas during the faire.

The Austin Robot Group had the giant ponginator robot, which is probably the biggest, loudest robot to be found in the State of Texas. They had about a dozen tables of smaller projects too. There were also fire-spewing machines, strange vehicles, medieval siege weapons, the Swap-O-Rama, DIY metal forging, liquid nitrogen ice cream, wind generators, linux clusters, pretty girls, (with mohawks), pirates, (and a pirate ship), tesla coil music, and a nice sunset on Saturday night.

Jerry Chevalier, a member of the B9 Builders Club, recently hosted a robot building event at his home in Rowlett, Texas. In addition to B9 builders from all over the United States, he also invited R2 builders and members of the nearby Dallas Personal Robotics Group. There were lots of B9 and R2-D2 robots, some working and some under construction. Other Star Wars astromechs such as the R5 also made an appearance. There were also smaller robots, movie props, and even a working replica of the Jupiter 2 flight console. Besides building robots, all the builders shared a BBQ dinner Saturday evening. I was lucky enough to be there and shot a few photos of the robot-building fun.